Autumn means chestnuts, and in Italy there is a very particular and interesting traditional cake made with chestnut flour: the Castagnaccio.

More precisely is a cake typical of the regions Tuscany, Liguria, Emilia-Romagna, Piedmont and Lazio, but it’s also made on Corsica island.

We call it cake but it’s not really matching the common idea of a cake: there is no sugar, no eggs, no butter, and there are extra virgin olive oil and rosemary 🙂 the only sweet notes are given by the raisins and the chestnut flour which is lightly sweet.

Other local versions include orange peels, cacao, milk, fennel seeds, dried fruits. But this is the most common and considered the more traditional one. And depending on which part of Italy you are it can be called castagnaccio, castignà, migliaccio, baldino, ghirighio, pattona, patuna.

Moreover the traditional versions are usually thin, no more than 1 or 1,5 cm thick, but in some areas they make it thicker too. For example in the city of Lucca they make a thicker version called Torta di Neccio.

It’s not clear its exact origin, but the Commentario delle più notabili et mostruose cose d’Italia e di altri luoghi written by Ortensio Landi (in the year 1553) credits some “Pilade from Lucca” as the inventor of the castagnaccio.

It’s another of those traditional recipes that was born as a poor dish, chestnuts were easily available for everyone, but nowadays instead it’s not really a cheap cake: chestnut flour usually costs between 12-16 euro/kg, and pine nuts are getting higher and higher in price 🙂 but once or twice in a year it’s always a good recipe to bake, it makes you feel the autumn 🙂 since as I said it’s not really a sweet cake, I like to simply pair it with fresh ricotta and chestnut honey. In this case I used fresh Orda that I bought at a local market, which is the Hungarian version of ricotta. I really suggest this, because the cake itself it’s a bit heavy, but together with ricotta they are simply perfect 🙂

Someone might be interested to know that chestnut flour is naturally gluten free. And the fact that this cake has no sugar at all makes it an interesting and healthy idea for dessert. Pine nuts are also rich in phosphorus.

Let’s see how to make it.

INGREDIENTS (for a large oven tray):

PS: I sprinkled also some cacao on the dish and I added also a very tasty and perfumed candied orange peel. HERE is the recipe for it 🙂 and if you prefer you could cut some of the rosemary into very small pieces, in this way it’s easier to eat it and you wouldn’t use it just for the aroma.

It’s really a simple but great recipe in my opinion, the flavor of chestnut is very intense and clear, and the fact that there is no sugar makes it even more clear. The the toasted pine nuts add a nice note, and the rosemary adds a beautiful and unusual aroma. 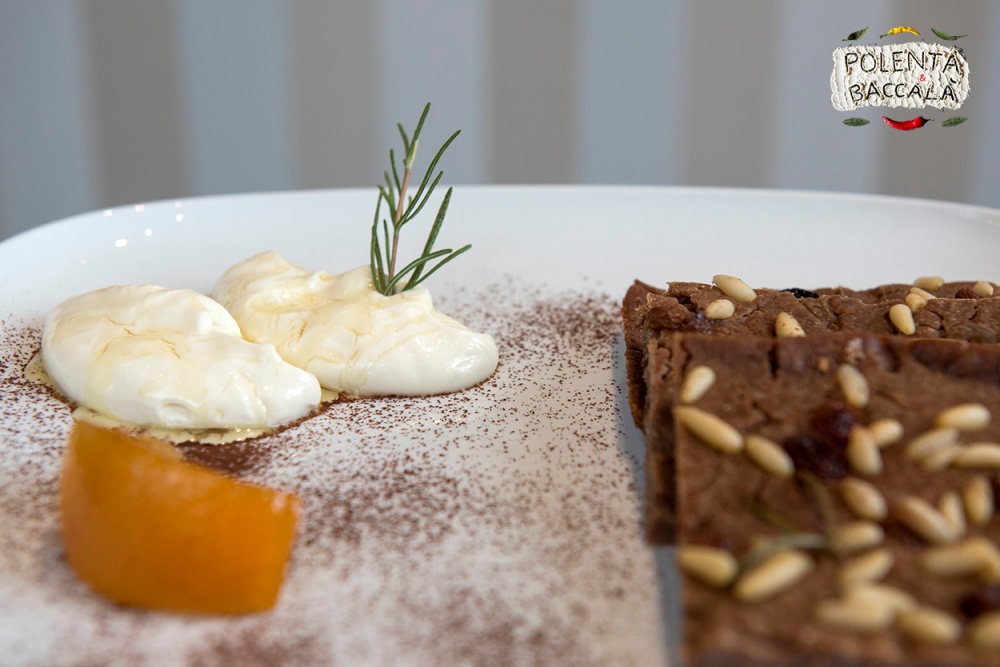 Products used in this recipe: