We are in September, soon the weather will get worse, and in the garden there is still a lot of basil….what to do with it? An original Pesto, of course 🙂

What is the Pesto? The word “pesto” comes from the word “pestare“, which is the movement with the traditional tool (called “pestello“) to make pesto.

So let’s say soon that to obtain the best result in terms of color and consistence/texture, we must use the original tools (and good quality ingredients, as always) 🙂 I had the opportunity to go in Liguria region and try the pesto made in the traditional way, and yes, it’s different.

But though I’m promising to myself since a while to buy the original tool, unfortunately I don’t have it yet 😀 so at the moment I’m doing it with the food processor.
The problem with the food processor/mixer/blender is that the blades heat the basil, which in this way loses the typical beautiful bright and vivid green color of the pesto made in the traditional way, becoming oxidized (though the taste doesn’t change very much), but we can try to avoid oxidation as much as possible by putting the mixer bowl and the blades into the freezer, and by using the food processor/mixer with few and very short impulses.

The mixer usually makes it also too much creamy, instead it should be more “grainy”, so there is a problem more with the texture than with the final taste. But we can avoid that unpleasant consistence/texture by adding the extra virgin olive oil just in the end, mixing it manually to the pesto.
Another problem is with the pine nuts: lately they became quite expensive, so more people started to use for example walnuts instead of them: I agree that also with walnuts is quite good, I also do it sometimes (but now my wife became suddenly allergic to walnuts, so I will have to do it only with pine nuts 😀 ), but don’t say to any Italian from Liguria region (where the pesto comes from) that “with walnuts the result is almost the same”, they could start a fight 😀 and honestly, with pine nuts it tastes better, walnuts have a more overwhelming taste.

Cheese: already in very old recipes there are mixtures of Parmigiano Reggiano and other cheese (even dutch Gouda in a source of early XIX century, and it’s not strange because of the historical commercial relationships of Genoa), but nowadays most of the trustworthy sources agree on the use of Parmigiano and Pecorino (usually the “Fiore Sardo”, also because the past relationships between Genoa and Sardinia). But if you prefer to use just Parmigiano Reggiano that’s also fine.

Garlic: going a lot back in time much more garlic was used. For centuries this ingredient was very important in the nutrition of the local people in Liguria, especially for the ones who lived by the sea. The sailors ate a lot of garlic since they believed it could protect from illnesses during their long travels in bad conditions. But nowadays no one use so much garlic, also because it can endanger social relationships 😀

So, let’s see the procedure.

If you want to do it with the original tool, I suggest to watch this video to see in which order you have to add the ingredients: click HERE 🙂

If instead you are going to use the food processor, read the following instructions 🙂

INGREDIENTS (for about 10 portions of pasta):

With pesto we can do many things, the best is for sure to make a pasta: the tradition wants that we use “trofie“,”trenette” or “testaroli“, but I think that “eliche” (as I used in this case) or “fusilli” fit very well with it too. Also with “gnocchi” it can be good.

If you want to use it with pasta, just boil the pasta into salted water, and then after you have drained the pasta just add it to the pesto, pesto that must be at room temperature…we took care not to oxidize the basil while making it, so there is no logic to warm it up in a pan, right? 🙂 if you want, add an extra drizzle of extra virgin olive oil, that’s never a problem 😀

But you can use a small spoon of pesto also to add extra flavor to your soups, for example in a nice Minestrone.

You can preserve it in the freezer, I usually put the pesto into ice cubes molds, and then when it’s harder I put the cubes into freezer bags/containers. They can stay in the freezer some months with no problems. It’s not the same as with a fresh pesto, but for the winter it’s also good, trust me 😉

PS: luckily the oil is made by my father and I don’t pay it 🙂 and the basil was in the garden, but let’s see how much costs this recipe, if you have to buy all the ingredients, just for curiosity 🙂

I counted about 7-8 Euros, but I don’t know how much would cost the basil.

We said that this recipe is enough for about 10 portions, so it’s 0,70/0,80 Euro per portion, about…all in all, I think it’s still definitely a fair price, considering also that we used only good quality ingredients 🙂 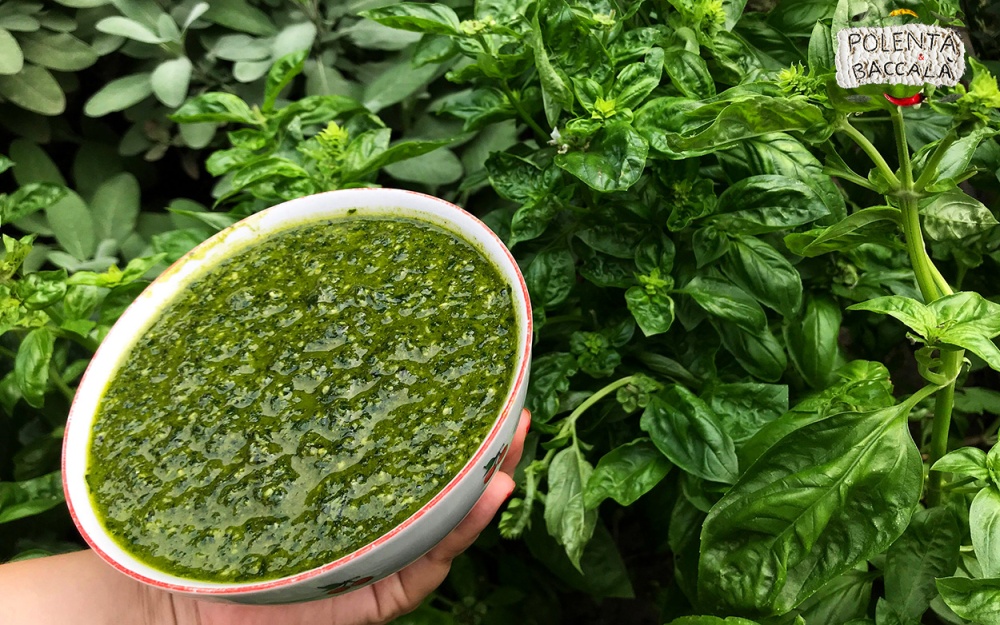 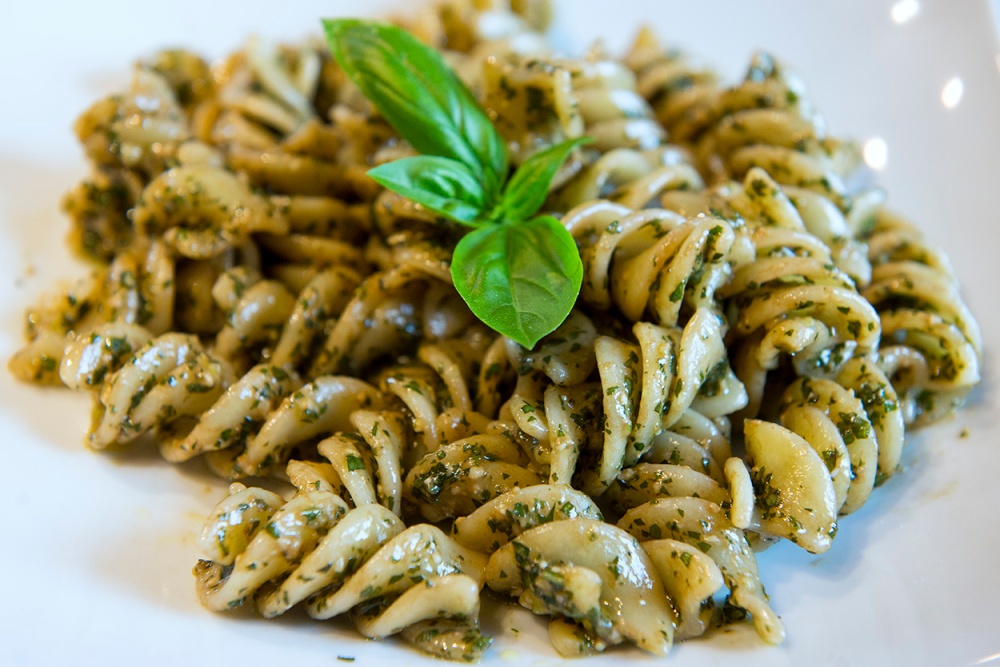