Following a post about Baccalà, here it comes the post about the other traditional dish that composes part of my blog’s name 🙂

Polenta, just the name reminds me automatically rich stews or roasted meat recipes, especially those which are usually prepared in the winter season (but not only)! Those kind of intense flavors, juicy meats, tasty sauces….mmmm, in few words polenta reminds me the beautiful side of the winter 😀

Polenta is a very traditional dish in Italy, mostly in the northern part of Italy (although there is something also in the center-south, for example the “frascatula” in Sicily). The Ancient Romans had the “puls“, which it was made not with maize but with other cereals, mostly the farro but also the millet and the barley. The maize became the main choice from the XV-XVI century. Polenta was always one of the basic recipes of the rural tradition, a simple but nutrient dish…I still remember when I was a child my grandfather saying “eat more polenta, you will grow stronger” 🙂

Definitely, in the northern Italian regions polenta is a symbol, it’s part of our roots, and in many families (especially outside from the cities) there is rarely a Sunday lunch without polenta.

Just for fun, southern Italians when they want to joke or tease they sometimes refer to the people of Lombardy region and especially of Milan area as “polentoni“. While in Lombardy region the same word (often said in dialect, so “polentù“, which grammatically it’s an augmentative word) it’s used to refer to a person that works very slowly or to a lazy person (because to make a very big polenta it’s a long and slow process) 🙂

As I said, polenta is a very basic and simple recipe, it’s made of flour and water.

Which flour? Mostly cornmeal (in Italy we usually call it “farina gialla“, yellow flour, although in Veneto region there is also a polenta made with white cornmeal). But there are various kinds of cornmeal, from different kinds of maize and with different levels of refining. Moreover the maize is naturally gluten-free, so also people with coeliac disease can eat Polenta without problems.

The best cornmeals are usually stone-ground, and sometimes it is specified which maize has been used.

One of my favorites is “farina di Storo”, it’s a cornmeal made in the village of Storo (Trentino region), from a type of maize called “nostrano di Storo”,  derived from Marano maize, it’s an orange/red maize with a limited yield, this cornmeal is ground still nowadays using a mill stone (in this way all the nutrients are kept) and it has a very good and intense taste, a countryside taste I would say 🙂 The cobs are harvested in late October and they are left to dry with the mountain wind, slowly.

But there are many other types, some of them of very good quality.

The traditional ecotypes of maize have usually lower yields than the modern ones, but the polenta with the best taste are in most of cases made with those traditional maizes, and not with the modern types. I think it’s very important to protect them, that’s the only way to protect such a traditional food and to be able to reproduce those specific tastes.

So, how to make it? Traditionally polenta is cooked in a big “paiolo“, a specific pot/cauldron for polenta traditionally made of copper, and it was usually cooked on a fire. But also other metals can work well 🙂 not so well like copper maybe, but it’s also ok.

So you have to try, or you must trust what’s written on the package.

HOW TO MAKE POLENTA:

For example the cornmeal I usually use, Farina di Storo as I previously said, it can easily absorb water for 4-6 times its weight, so when I prepare polenta as a side dish for 4 people, I use 300 g of that cornmeal and 1,3-1,5 liters of water. For 6 people 450 g of cornmeal and 2-2,2 liters of water, and so on. But this is for my favorite polenta, indeed as I said the quantity of water depends also on which result you want to reach: based on the same amount of time and on the same type of cornmeal, more water to reach a softer polenta and less water for a thicker result, but it’s always depending on the type of cornmeal and the time, so it’s not possible to speak generically.

The first step is to start boiling the water. Then add a spoon of rock coarse salt (of course it depends on how much polenta you make: I use my eyes to measure, but about 10 grams salt in 1,2-1,3 liters of water, consider that usually polenta is paired with very savoury recipes). Someone say to add also a little drop of extra virgin olive oil to help not to have lumps. I don’t know if it’s really making a difference but I also add it, for sure it’s not a problem 🙂

When the water starts ALMOST to boil (just when you see little bubbles coming from the bottom) set the heat a bit lower and you have to add gradually the cornmeal, and while doing it you have to stir it fast using a hand whisker to avoid lumps: the polenta must not be lumpy at all.

Set the flame on medium/low and let it cook, you have to stir it regularly but not continuously, taking care not to burn on the bottom (and stirring with a big wooden spoon is the best choice). 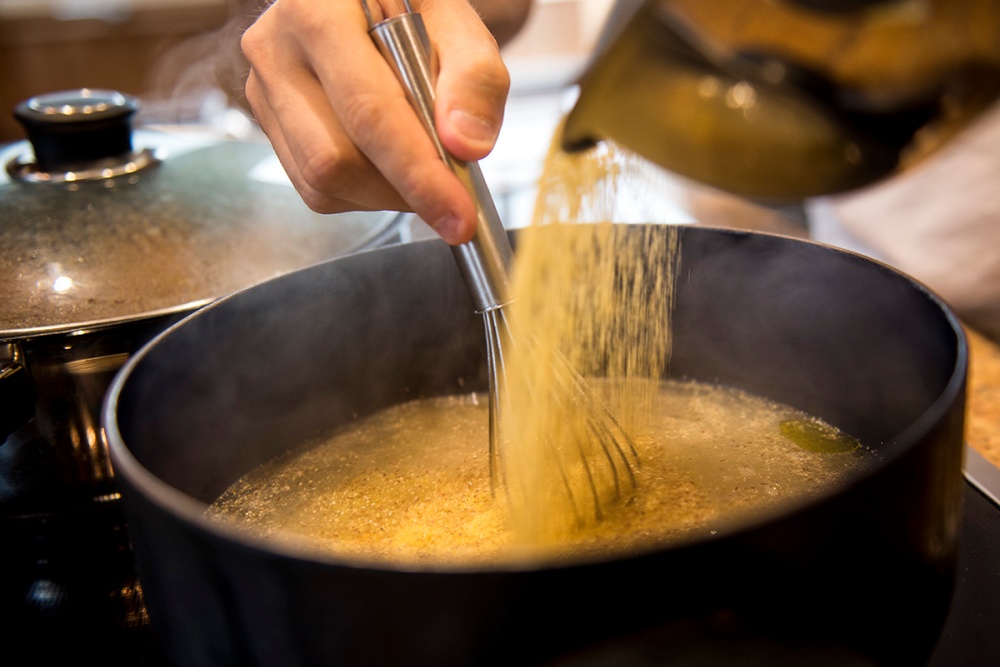 A good polenta requires to cook for at least 50-60 minutes (thinner grain cornmeal cook a bit faster, while the cornmeal with thicker grains need some more time), the longer it cooks the better it is so let’s say 1 hour/1 hour 15 minutes to make it how I like it 🙂 it’s ready when it’s no more attaching on the sides of the pot. The more it cooks and the harder it comes, personally I don’t like it too soft. So let it cook until it reaches the right texture for your taste.

When it’s ready you have to turn fast the pot upside down and with one movement on a wooden plate. And if you used a copper pot or a cast iron pot (but not with nonstick materials) you will easily have also a very tasty crust remaining attached on the bottom…much better than most of the nachos you can buy in supermarkets! 🙂 HERE you can see what I mean 🙂

This is the polenta normally used as side dish next to stews, roasted meat, game, etc.

But there are many polenta recipes which are “richer” and they could be easily a main dish. Those recipes are typical of mountain areas, usually.

Here there are some of those:

But these are just some, the list is very long: with meat, with mushrooms, with herbs, etc.

Talking about my area of origin, Brescia, one of the most traditional and famous pairing it was “Polenta e osèi“, that in the local dialect it means “polenta and birds”…yes, wild small birds 🙂 I know that for many people it might sound weird, but it was a very traditional dish, nowadays forbidden (well, it’s forbidden to hunt the most traditional birds used for it, but many hunters still make it illegally at their homes with those birds 😀 but with some other birds it’s still allowed, although with many restrictions).

So, polenta for me is part of the Sunday, especially in winter, it’s the perfect pairing to many great fulfilling and succulent recipes.

And if it’s remaining it’s very good when grilled: for example, typical of my lake area is grilled polenta with dried and salted sardina (a fish from the lake), also grilled. And in the past it was also eaten for breakfast, softened in a cup of milk. Also fried is very good.

Once again, it’s one of those foods that demonstrates the greatness of simplicity 🙂

PS: pre-cooked polenta exist, but my suggestion is to forget about, they are absolutely not comparable to a real polenta…simply forget about 😉 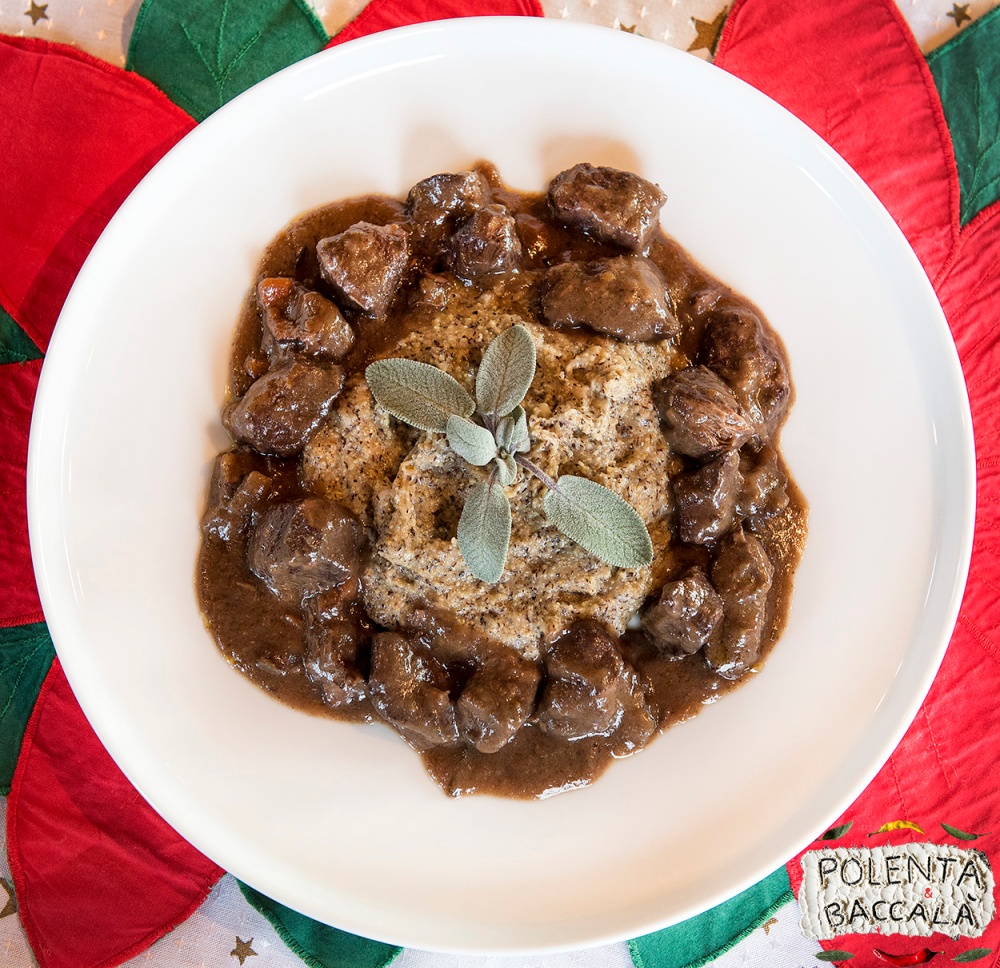