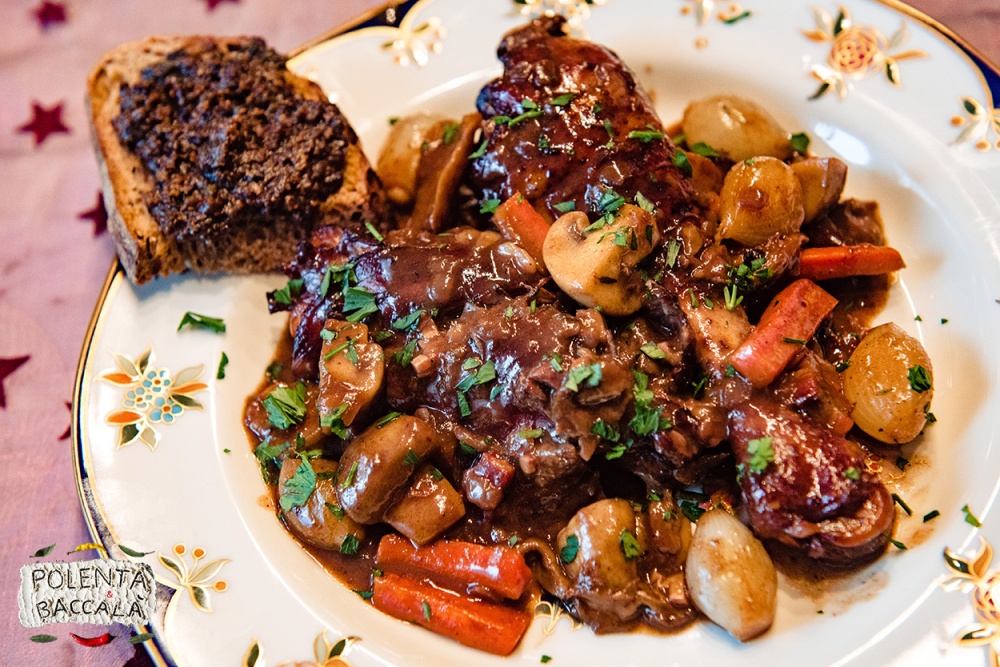 This is one of the most iconic recipes of the French cuisine, not only because the “coq” is their national symbol, but because this recipe is really a masterpiece if properly executed.

It’s an old recipe with a long history and tradition, that dates back when it was common to have roosters at home, or at least it was much easier to find them 🙂

This is a dish that takes quite a lot of time and efforts, and it’s a recipe that requires, as I said, an ingredient that nowadays it’s no more so easy to find: a rooster, a tasty and healthy free range rooster, so an animal that spent his life at open air and that took at least 10-12 months to grow and not just 30 days like most of the industrially farmed chickens nowadays. So it’s really a special dish for special days, perfect for the feasts 🙂

The recipe I’m showing it’s indeed intended for an animal of this kind, with tougher meat, that requires long braising times (at least 2 hours, but also a bit more). It’s a recipe that can be made also with a normal chicken, but in that case just 40-50 minutes are enough, so all the following procedure and times cannot apply in that case. In that case I suggest to simply add all the ingredients in the first steps and cook together till the end, but you’ll not have the same flavor and result. So my suggestion is really to look for a real free range rooster and to make this recipe really special, for special occasions. As I always say, I prefer to choose to do it less times, but as better as possible.

Wine: the usual choice in France goes on Beaujolais wine (like the Fleurie AOC), or other Burgundy red wines. So choose wines made with Gamay or Pinot Noir grapes, to be faithful to the origins of this recipe.

Some recipes suggest to use more wine, up to 3-4 bottles for a whole rooster (plus 1 for the marinade), to be previously boiled until reduced of one third to concentrate color and flavor, and only then used it to cook. That’s up to you, obviously it increases much more the cost of the recipe.

To use all the rooster at the best, I also prepared a delicious “Crostino Toscano” using its own liver, heart and gizzard. It’s perfect to serve as appetizer or next to it. 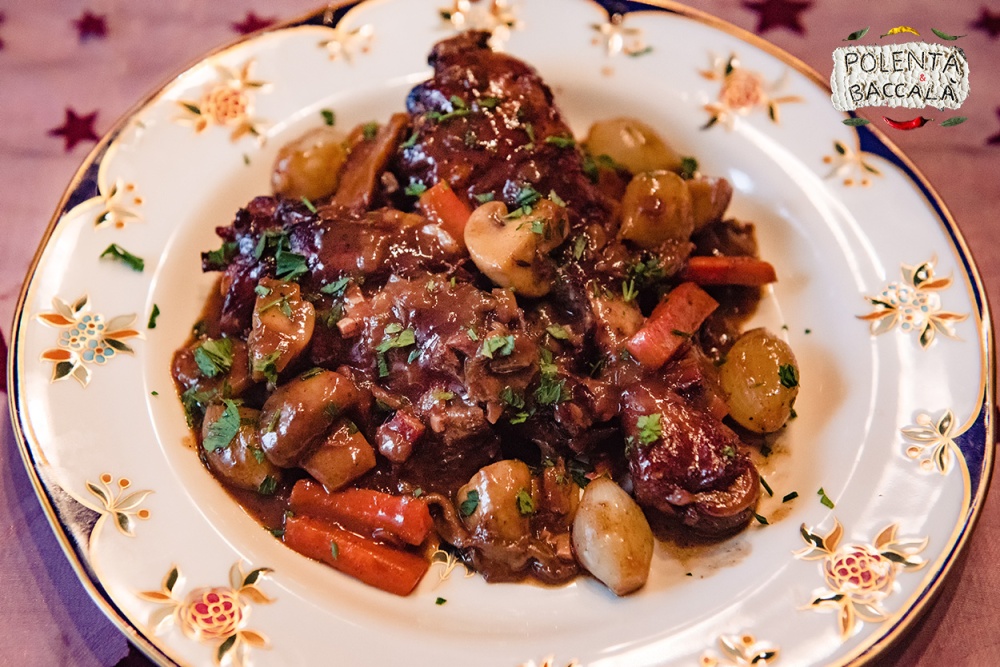 As always with this kind of recipes, if something remains you can also do a very good pasta on the day after 🙂 I carefully removed all the meat from the bones, I added just a little bit of tomato sauce since I was a bit short of sauce, a ladle of hen broth while the sauce was simmering (not to get too dry), I cooked apart some extra mushrooms and pearl onions (then added to the sauce), and served with ziti 🙂 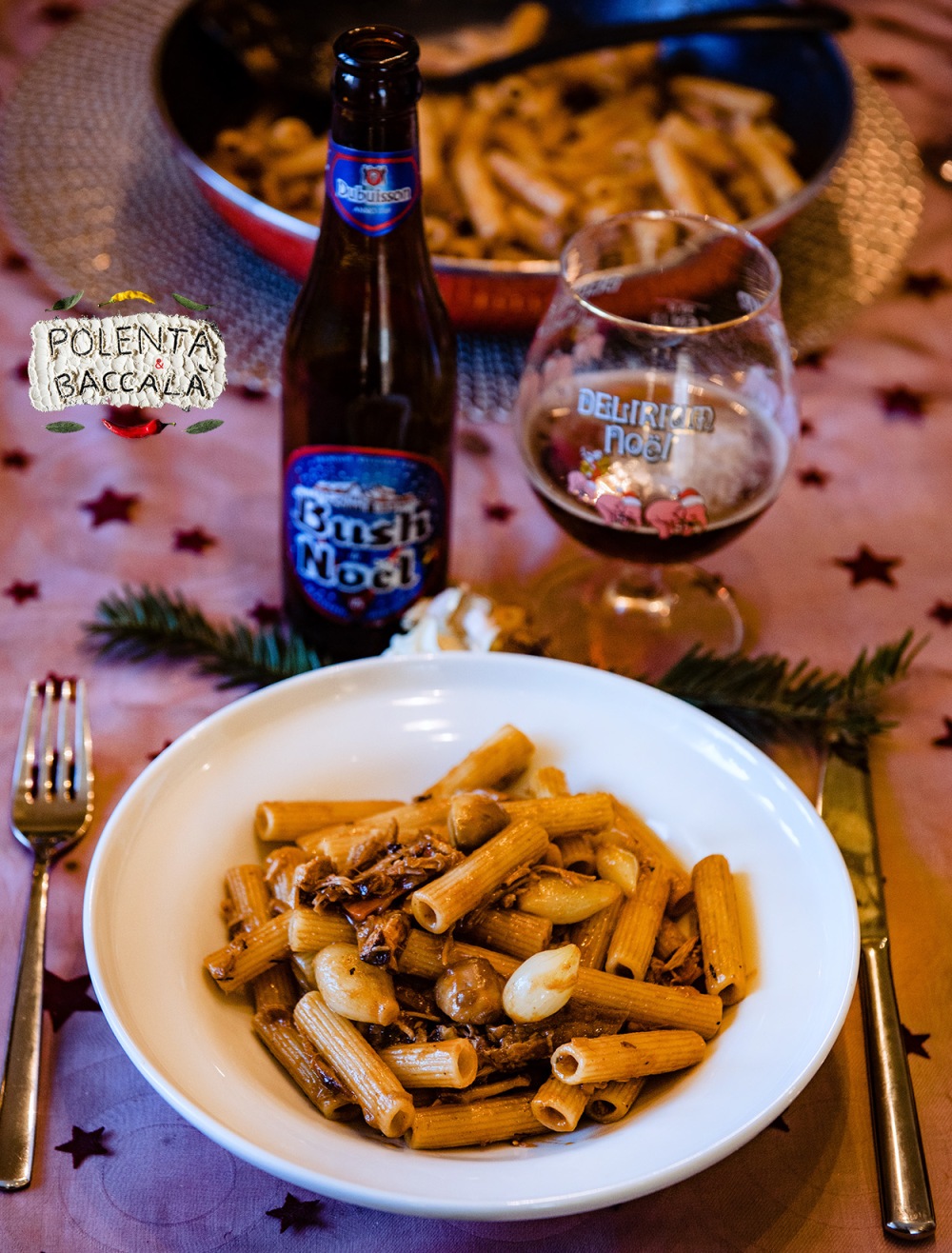